Please switch to a modern browser like Chrome, Firefox or IE10+ for better experience.

Sniper 3D
iOS
OR
Thanks for contacting us. Your message was received.

All you need to know about PvP

What is PvP Arena?
The PvP Arena is a weekly online multiplayer event. In this event, up to 8 players will engage in a sniper free-for-all. Your opponents can be real players from all over the world!
There are only two conditions for entry: You must have completed the first five Spec Ops missions, and you must have a Sniper Rifle. Your Gear and weapon upgrades are all down to you.
How does a PvP battle work? 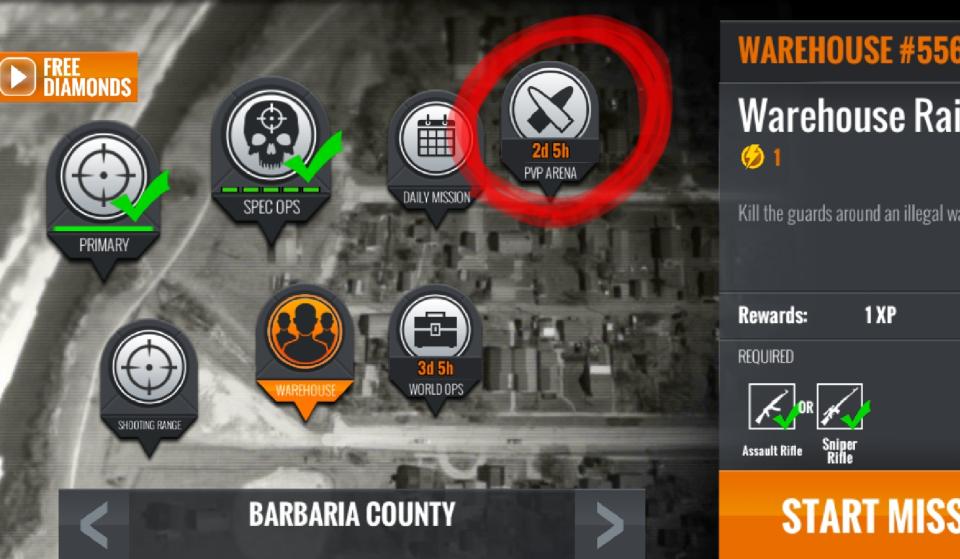 When entering a PvP battle, you will spawn in one of the spawn points in the map. You must use your Sniper Rifle's scope to find opponents, then eliminate them. At the beginning it might be a little difficult, but use the tips below to find your feet. You'll get a sense for when you're aiming near your enemy, or if you still have a way to go.
When you are killed in battle, you will respawn in another location. The respawn time is 8 seconds, but you can pay 30 Diamonds to skip the wait and get back into the fight immediately.
At the end of the battle, each player receives Blue Skulls for their performance in the battle. This value can be positive or negative.
How can I earn points in a PvP battle?
During the battle, you will earn kill points. These are the numbers that you see coming from your opponent when you hit them and they define your position on the scoreboard.
You can get them by:

How are Blue Skulls calculated?
Blue Skulls are earned in battle, and are calculated based on the following:
How does ranking in PvP work?
There are two types of rankings in PvP: the Player Ranking and Squad Ranking. If you'd like to learn more about Squads, please see this article: I want to join a Squad.

In Player Ranking, all of the Blue Skulls earned are added and you'll earn a position on the leaderboard. In Squad Ranking, all of the Blue Skulls earned by all members are added, and the Squad will earn a position on the leaderboard.
At the end of the event, two rewards will be given according to each ranking to all players who participated in the event. To receive the Squad rewards, you must have earned at least 200 Points.
Once the week is over, all of your Blue Skulls will be reset and you'll have a new week ahead and a new opportunity to be on the first place of the leaderboards.
Last Updated: 275d • Permalink

Your browser does not allow you to contact us from this page because third party cookies are disabled. Click continue to open this form in a new tab.

Something went wrong! Please reload and try again. We're sorry for the inconvenience.

You're navigating to a different app. You'll be able to continue the current conversation only when you switch back to the current app.